SOLID FOUNDATIONS FOR AN EVEN GREENER FUTURE

Angelo Capra and Eugenio Cereda are the historical memory of Mattei: from their stories of the evolution of the machines that have made the company’s history, to those of the “glorious past” we can see what has allowed Mattei to become the international group of today that exports compressors all over the world.

In the story of every company there are key figures who, in some way or another, have characterised the key stages of the evolutionary path, thanks to their leading roles. People who with technical, commercial or administrative skills, witnessed from their own perspectives the different phases of transformation of a hundred-year-old entrepreneurial entity. For Mattei, it is Angelo Capra, a long-standing Commercial Director, and Eugenio Cereda, in after-sales service until 2013, who embody this role. 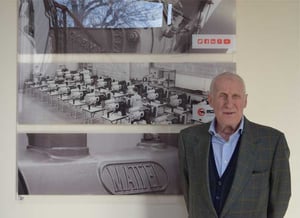 "I started working in Mattei in 1956, at a very exciting time for the company”, says Angelo Capra. “Mattei still produced large horizontal piston machines, an example of which was the MO series with a rotation speed of only 300-350 rpm. In 1958 there was the advent of the first rotary vane compressor, with the air-cooled ERR 25000 model and the water-cooled ERW version. At the end of the 1950s, exports (which today account for more than 75% of the business) began with our partner at the time, whose range we complemented with the larger machines. During my career with Mattei I traveled a lot and was witness to the worldwide reputation for reliability which Mattei rotary-vane technology enjoys. Machines which are quieter and compacter and which can be maintained at reduced cost in comparison with screw-technology.” 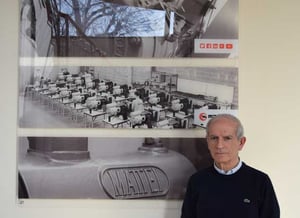 Eugenio Cereda joined the company in 1971: “Back then the top compressors were the ER 6600 17bhp, the ER 14000 30bhp, and then the ER 25000 60bhp, alongside which were the compressor motors coupled with a diesel engine. In 1974 the technical director, Ing. Boldrini, started a great revolution with the design of the ER 350, which unlike previous models, had an oil separator with ceramic elements as opposed to woollen felt, which gave a higher air quality. Furthermore, to carry out maintenance on the coupling joint it was enough to just remove the rotor stator assembly without having to disconnect the motor. It was an extraordinary machine, produced only in Italy, whose airend is still supplied today. Another important step was the introduction of the smaller machines; the 20-64 range from 4-11kW, launched at the BI-MU trade fair in 1988 and featured a combined radiator for cooling both oil and compressed air, instead of the disc radiator, thus eliminating the risk of oil leaks.”

Over the years, both have witnessed a series of significant changes, not only in the design of the machines but also in market strategies. “The advent of new technologies, both in design and production have allowed Mattei to develop machines with minimum margins of error to reduce leaks and improve the efficiency of the compressor”, continues Cereda, “Another fundamental step was the introduction of the control centres and monitoring devices, the first of which were installed at the Zingonia plant in the 1980s.”

Capra underlines: “It was also in those years, thanks to the performance of the rotary vane compressors which could guarantee 24 hours of compressed air delivery, that Mattei managed to penetrate the market of smaller companies, such as the Brianza furniture factories and the Bresciano sanitary fittings producers, as well as countless mechanical workshops. Then, with the intent to even better satisfy the requests of customers, Mattei started to supply just the pumping units for OEM applications alongside the industrial compressors. These collaborations still continue today, as testament that the reliability of the Mattei compressor lasts, and those who choose a rotary vane compressor are rarely willing to change it.”

Coming back to the compressors, most representative in the story of Mattei, it was at the end of the 1990s that production of the first series of high-efficiency machines began, recalls Cereda: “The first series of Optima, variable speed compressors with an electric three phase motor (4-6 poles) was launched in 1998, and within a year, Mattei was the first to go to market with MIEM software to analyse energy consumption and come back with precise indications for energy efficiency and how to realise it. Soon after, in 2000, it was the launch of Maxima, the only compressor of its kind and an evolution ahead of the competition, with only 1,000 rpm it guaranteed high efficiency and unparalleled energy savings. In 2005 the second series of Optima was presented, this time equipped with an inverter.” Exactly 20 years after the introduction of the first energy-saving machine, Mattei continues on the green path, investing both human and economic resources with the aim of further improvements to the efficiency of the compressors, as is the case with the latest generation of Blade i models, and Maxima Xtreme.