Once upon a time, a former Mattei employee left to start a company. That company became one of our most valued, steadfast partners: a top distributor of Mattei compressors, with values very much in line with our own.

We were beyond thrilled to celebrate AIR ECOS Srl's 40th anniversary this week with Ugo and Andrea Menin. 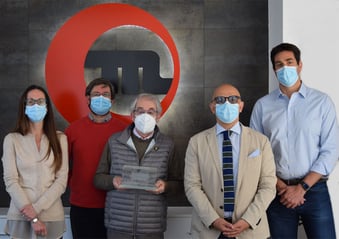 CONGRATULATIONS from all of us at Mattei Group, and we very much look forward to what the future brings!

"In 1981, Ugo Menin and a partner founded AIR ECOS in Monza after 20 years at Mattei.
The company grew exponentially, adding full technical support, and solidifying AIR ECOS as the distributor of reference in the Brianza area.

In 1986, the company moved their sales offices, workshop and spare parts warehouse to Agrate Brianza.

AIR ECOS expanded its offerings: in addition to its core business of selling industrial compressors, nitrogen generators, used mostly in the food & beverage, electronics and laser-cutting industries, were added to the company's portfolio.

In 2014, it was one of the first companies in Brianza to be awarded FGAS certification, allowing AIR ECOS to operate on air compressors used for industrial refrigeration and drying installations.

Today, over 350 Brianza-based companies have bought products from AIR ECOS, and the company provides professional maintenance for over 750 compressors.

Energy efficiency has become of such importance that AIR ECOS now has a department entirely dedicated to energy saving in compressed air. The use of modern tools to measure energy consumption in compressor rooms, software to optimise compressor operation, analysis of compressor installations to find leaks and check air quality, the availability of high-efficiency compressors like the new RVXi/Xtreme line, are just some of the aspects that all manufacturing companies today must take into consideration to reduce energy waste, guarantee high-quality end products without raising costs, ultimately allowing them to increase market share."