Pioneers in the compressed air sector with their exclusive rotary vane technology, today the company focuses on energy-efficient, environmentally- and economically-sustainable solutions.

Vimodrone, May 2019 –  A special birthday is being celebrated this year by Ing. Enea Mattei SpA, a specialist in the design and manufacture of compressed air equipment. A hundred years of history are in fact, a significant step in the evolutionary path of a company that has always looked to the future with a determined vision, that focuses on the sustainable innovation of its products.
It was 1919, when the engineer (Ing.) Enea Mattei, born in Morbegno in 1887 and having graduated in engineering at Bologna in 1912, decided to give up his job at the Civil Engineering department for whom he had served during the First World War, to start up an entrepreneurial activity in the field of compressed air. In Italy, there wasn’t yet any specialisation of the industry. It was from then the history of the Mattei company as we know it today, began in 1919 in a small workshop in via Padova in Milan, where Ing. Enea Mattei worked on remnants of war acquired by the Italian State.

The company experienced exponential growth collecting several firsts, such as the construction of the first compressor with a diesel engine in 1934. In those years production was focused on very powerful piston compressors (L series) that were a huge success in Italy and began to be exported around the world.

The years following the Second World War were full of dynamism for the company. A growth that continued even after the passing of Ing. Mattei, when in 1958, anticipating a shift in demand towards lighter and smaller compressors, the innovative rotary vane technology was introduced, which until today has remained the company hallmark. In 1960 the company was listed on the stock market, and acquired by the Contaldi family in 1962, owners of OMIC (Officine Meccaniche Ing. Contaldi), a company founded in Naples in 1866, specialising in the energy sector. Giulio Contaldi assumed the role of Mattei CEO and the site at Vimodrone became the company headquarters. 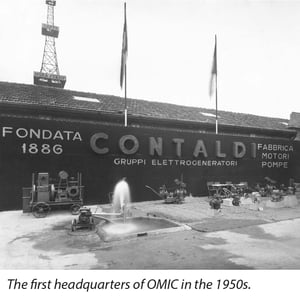 Since the 1980s, alongside the opening of the Verdello-Zingonia (BG) plant, a massive expansion programme began overseas with the creation of branchesin the United States, France, Great Britain & Germany; an international trend that continued in the 2000s with new representative offices in Russia, Spain and Singapore and the opening of the first production site in China in 2007, which became Mattei Suzhou in 2015. That same year, alongside the development of
the business in the South-East Asian markets, the British company Winton Engineering Ltd, a specialist in the solutions for the supply of “on-board energy”, was acquired.

Mattei also expanded into new ways of doing business and in addition to industrial compressors, began to supply just the pumping unit for OEM applications in the 1980s. The first partnerships, which are still going on today, are those in the vehicular sector, to which they have been joined also by partners in the gas recovery sector.

Today the company has 250 employees in 8 branches around the world, produces over 6,500 compressors a year and exports around 75% of them to over 100 countries worldwide.
The common thread in the story of Mattei is continuous innovation. Born from the intuition of its founder as to the great potential of compressed air in the industrial sector, the company has
distinguished itself since the early years for the reliability, compactness, silence and efficiency of its machines; characteristics that are also inherent to rotary vane technology.

Energy efficiency has been the focus for research and development in recent years, looking to develop ever more environmentally and economically sustainable solutions. In 1998 came the first of the variable speed series, Optima; in 2000 it was the turn of the high-efficiency Maxima series, which with a rotation speed of just 1,000rpm was designed for applications requiring a constant and uniform air supply. Mattei also contributed towards “green” objectives with the development of control systems, which ensure a reduction in energy consumption of up to 35%, recovery systems that recoup up to 80% of industrial heat and the MIEM consumption analysis software, developed in the late 90s. 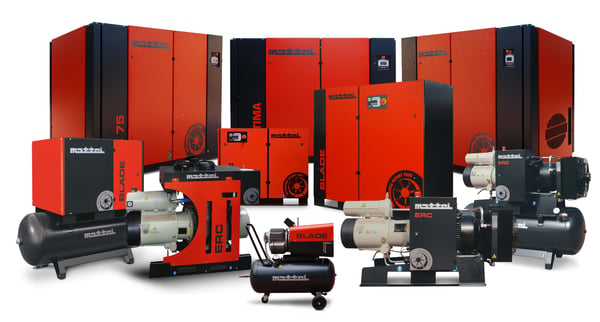 The latest evolution of the energy-saving machines is the new Mattei Xtreme 90i, exhibited at the recent Hannover Messe, which offers even higher levels of performance in terms of both efficiency and eco-sustainability.

The investments in R&D have allowed Mattei to face even the most difficult economic periods, focusing on high levels of product customisation and diversifying into new markets related to
alternative energy sources: from the introduction to the world of biogas recovery, to the study of tailor-made solutions for vehicular applications, with a particular focus on electric mobility.

With regards the leadership, the company today is guided by the children of Giulio Contaldi, Giulio and Silvia, who conscious of the wealth of experience and values acquired over a century
of activity that is now directed towards responding to the new challenges from industry, concluded: “The milestone of 100 years of history, which few Italian companies can boast, fills us with pride for the work done and the results achieved in the world of compressed air, of which we were the pioneers with the intuition to introduce rotary vane technology. But there is also awareness that this is a new starting point, not the destination. We give our best in our daily work, but we always keep an eye towards an even more sustainable future, to which we are focusing on the study of more efficient compressors, and the adoption of organisational working models according to the Lean Management philosophies”.