Both the Bologna and Rivalta Scrivia rail freight terminals have now chosen the Czech company.

Vimodrone, March 2022 -The quality and performance of Mattei compressors are also behind the success of the locomotive manufacturer, Cz Loko, based in the Czech Republic, now also with a branch in Mantova in Italy.

In recent months, the Bologna rail freight terminal has also taken a Cz Loko locomotive, the

4-axle, semi-central single-cabin, 741 series. A model designed for shunting services in airports and freight terminals, but also on the mainline and within railway construction and repair yards. An identical locomotive is currently being finished in the Czech Republic and will be delivered to the Rivalta Scrivia freight terminal in the province of Alessandria. These are both new customers, joining dozens of other Italian businesses who have already chosen Cz Loko and Mattei, who with their high levels of brand loyalty has helped them quickly become a leader in the Italian market.

The Czech company is Europe's second largest diesel locomotive manufacturer. Founded as a repair shop in 1849 in the town of Česká Třebová, in recent decades it transformed itself by specialising in the design and construction of diesel locomotives, as well as activities such as maintenance, overhaul and modernisation. Today it has over 800 employees and two production sites. Present in Italy since 2016, the subsidiary Cz Loko Italia has been active in the maintenance sector with both fixed and mobile workshops, allowing it to cover the entire country.

"For over 20 years CZ Loko has been using Mattei vane compressors for its locomotives"
confirms Marco Danzi, President of Cz Loko Italia; "first as a solution adopted for the 753
locomotives destined for Italian railways, but which has now spread rapidly into all markets and Mattei features on the entire Cz Loko range".

"The Cz Loko locomotives are mainly used for shunting services in ports and terminals, as well as in goods train services on non-electrified mainlines; which actually make up much more than you would think”, explains Danzi. “As an example: there are Cz Loko locomotives in the rail freight terminals of Novara, Milan, Melzo and Verona, as well as in the ports of Ravenna, Livorno and Bari. Every day they pull trains that serve the automotive industry in Melfi, the cereals sector in Piedmont, the ceramics industry in Emilia, and important
industrial hubs such as the large refinery in Sannazzaro de' Burgondi, in the heart of the Po
Valley".

For Marco Danzi, the reasons why the company chose Mattei compressors over two decades ago are obvious: "Installing quality components is of fundamental importance to us, the lifecycle of a locomotive is measured in decades, so we must have reliable partners. Mattei compressors perform better than traditional screw compressors, are easier to maintain and are much quieter. These aspects are not to be ignored in terms of importance,
especially with recently manufactured vehicles, where it is essential to guarantee a high availability index but also improve conditions for personnel along with the obvious benefits from reduced emissions. All this needs to be achieved within the space and weight constraints of a locomotive".

Mattei Rail & Transportation products are mounted on CZ Loko lokomotives are distributed in the Czech Republic by Mondo, a company founded in late 1992 as an engineering and trading company focused on compressed air technology and air cooling and a partner of the Vimodrone-based company since 1996. 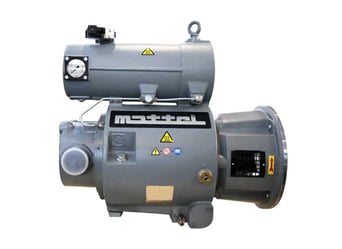 The locomotives produced by Cz Loko are equipped with compressors from the 111 series with varying configurations. More than a year ago Cz Loko Italia also started to install Mattei RVR04 compressors as part of an important revamping project of their 245 model, a smaller but very popular locomotive that needed a complete overhaul. Only the exterior of the original locomotive remains, while the engine and most internal components were completely renewed. Also with this project, commissioned by Italian State Railways through Mercitalia, it took just a few months to convince both technicians and drivers of the quality of the Mattei product, which is always efficient and reliable, even in the most difficult operating conditions.